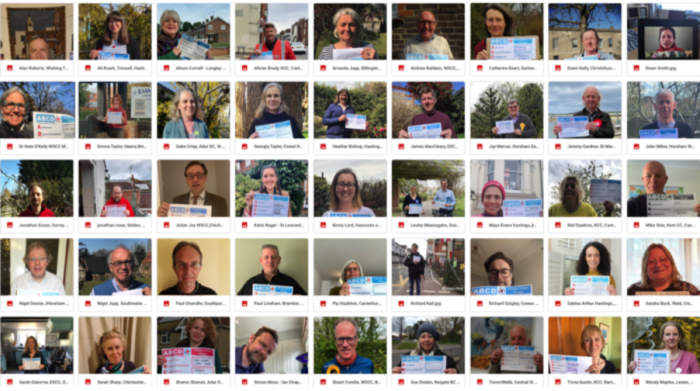 As the South East region gears up for another round of local council elections in May, we talked to some of the councillors who signed SECA’s ABCD climate pledge last year. This blog from Thalia Griffiths reflects on the challenges they have found in keeping climate issues on council agendas.

Some 330 candidates from all political parties signed SECA’s ABCD climate pledge cards during the 2021 local election campaign, and of those 61 were elected. They posted photos of themselves with their pledge cards on social media and committed to Aim higher, Build partnerships, Communicate, and Divest from fossil fuels.

The pledgers we talked to said they had found the pledge a useful campaign tool–the photos were visually effective and social media friendly–but in policy terms it also helped consolidate thinking by offering a clear position on climate change that campaigners could get behind. While they loved the pledge cards, they all agreed that supporting the pledge was the easy part and driving greener policies in their councils was a much tougher task.

While climate issues should be above politics, elections are by their nature political. One pledger we talked to said they had found the ABCD pledge a useful tactical tool to focus discussion. Local party groups, they said, were made up of diverse groups of members who had had little chance to meet and discuss policy issues, especially during the Covid pandemic, and anything that helped offer them an apolitical framework for building a policy position was very welcome.

“People felt ‘yes, we can sign up to this’. It was a really useful catalyst,” said one pledge supporter who felt their personal enthusiasm in promoting the pledge had helped win support from other candidates in their local area.

But signing a pledge card was the easy part. Councillors who signed up acknowledged that their councils face a whole raft of hugely challenging priorities, of which the climate emergency is just one. West Sussex, for example, needs to balance the potential for jobs and other economic benefits offered by expansion of Gatwick airport against environmental concerns and climate commitments.

At the same time, while opposition councillors are limited in how much they can influence council majorities, several councillors we talked to said they made a point of regularly raising green issues to keep them on the agenda.

“I ask a question at every council meeting: What about carbon literacy training? When are you going to have some targets? When are you going to start talking to the community? They always use the excuse of ‘we haven’t got any money and everyone was working on Covid’ which I understand, but I feel they could be showing more leadership in trying to get more people around the table,” one councillor told us.

Keeping climate issues on the agenda will be even harder this year as councils tackle the backlog of tasks put off during the pandemic and face up to the challenges arising from the cost of living squeeze.

Westminster politics are likely to be at the front of people’s minds and it would be easy for climate change to fall off the agenda, yet local authorities’ contribution to decarbonisation is potentially significant. They can help to deliver 30% of the cuts in carbon emissions needed to get the country to net zero, according to the UK’s Sixth Carbon Budget published in December 2020.

This is a hugely challenging time for local governments, but SECA’s hope is that the ABCD pledge campaign can help keep the climate emergency on councils’ agendas by signing up new councillors to keep green issues alive.